HORSESHOE CURVE THE DREAM THAT BECAME A REALITY

By Kathleen Doyne (Daughter of Bill Doyne RM-7020)
Pictures can be viewed at the bottom of the page.

My dad, Bill Doyne, a man who has a love of the Horseshoe Curve in Altoona, PA, finally had his interpretation of the curve created in miniature. Being an avid O gauge train collector for over 40 years and a collection consisting of early 30’s to present day, including Lionel and MTH.

He worked for the Pennsylvania Railroad and Amtrak as a hearing officer for 35 years before retiring in 1985. For years it was a dream to have a train platform depicting the Horseshoe Curve.

As a child growing up, I remember that at holiday time our train platform was always under the Christmas tree. My parents would work day and night in order to make it look just right. On Christmas morning, I would run down the steps to the living room to find the plasticville town that Santa had left just for me. On the tracks was my 1957 Lionel Girls train set. I would play with my trains for days at a time, but never got tired or bored. Sadly, when Christmas was over, the tree and trains were packed away for yet another year. However, my dad would always leave one train set on the tracks so that both of us could play for a few months longer.

After retiring from Amtrak, my dad had plans to work on his dream layout of the Horseshoe Curve. Unfortunately, this did not happen right away as my mom became very ill and my dad became a full-time caretaker to his partner of 54 years. After my mom passed away in February 2003, my dad started working on his layout at the age of 78. Several of his friends helped him with the basic setup, but he quickly ran into a roadblock. He wanted to build the Horseshoe Curve with commercial track, but spacing was the problem with the “o” gauge track. Many of his friends said it couldn’t be done, and said “custom track” was the way to go. For a time dad became frustrated and again stopped working on the platform.

I traveled with my dad to several hobby shops to get some ideas, and perhaps some suggestions, on how his dream could be accomplished.

We visited one such shop called Trains ‘N’ Lanes in Easton, PA where we had purchased some trains a few years before. There we met another train collector by the name of Doug Nigrone. Doug listened to what my father wanted to do, and from time to time would give him some pointers on how to accomplish his goals. But try as he might, dad still could not make the platform work.

Finally, after two more years of frustration and futility, I asked Doug Nigrone in November 2004 if he would directly help with the layout. Doug was luke warm at first, but soon became intrigued by the challenge. After I became very annoying and persistent Doug agreed to help us with this very large project in February of 2005. By March, the layout was under construction. Shortly after that, Doug and I started dating. Imagine I was annoying and persistent and we are still together today.

With Doug’s expertise and engineering skills, he was able to create the perfect vignette for the Horseshoe Curve. Doug made the platform structurally sound, and altered the commercial track to create the “look” of the Curve. As we later found out, this could not have been accomplished without changing track specs.

The platform was built one level at a time. It was tedious and painstaking work, and required a lot of patience and determination. After a few months, the basic platform was finally complete. Dad and Doug began running the trains when the track was laid and the wiring was done. Command control was later added to enhance the overall performance.

Now it was time for some scenery. Dad decided that he wanted to depict late October with all its brilliant fall colors.

In Oct of 2005, with camera in hand, dad, Doug his son Josh and I all headed for Altoona, a 5-hour drive from Warrington, PA. While in Altoona, we stopped at the Railroad museum, and then ventured on to the Curve. This was my dad’s first trip to the Curve. He had traveled several times on the Broadway Limited to Chicago around the Curve (usually late at night), but nothing could compare to seeing the Horseshoe Curve in person. Seeing an actual freight train make its way around the curve and up the grade with the help of the pusher engines was the best part of the trip for my Dad.

After taking about 4 rolls of film I had plenty of pictures to complete the scenery for the layout.

Back home working on the scenery, we used acrylic stain as a base coat on plaster cloth, followed by oil based translucent to complete the look. Several additional colors were dry brushed into the mountain to achieve shading. Once the paint dried, we added the foliage to complete the look. Various green, yellow, red and rust blended landscaping turfs were used from Woodlawn Scenic to create shading in the field and mountain areas. On the reservoirs, multiple layers of blue and green tinted translucent stain was added to simulate the water dept.

The basic platform is phenomenal. The bench work is butt construction with �” plywood framed with 2×3’s and 2x 2 legs with L girders. The layout dimensions are 8’x12″ and there is approximately 120′ of track. A new Lionel 180W ZW transformer, MTH Z750, Lionel 35w Transformer and 80w Lionel Transformer power the platform. The platform has six MTH track switches on the upper level and a lighted track diagram. The large outside loop has O-82 curves to accommodate scale and larger engines with inside track of O-54 to � O-31. Across the top of the platform the town has a #60 trolley line to carry passengers from one end of town to the other. The downtown area has been designed to have a forced perspective look with a busy street leading to a tunnel. Some of the structures and accessories on the layout include the Lionel Factory, Ameritown, Department 56 and several Plasticville buildings along with a few scratch built and kit bashed units. Plans are in progress for an additional level or holding area.

Dad has been reliving his “dream come true” every day now for over a year. We welcome any and all visitors, and look forward to sharing his hobby with others. 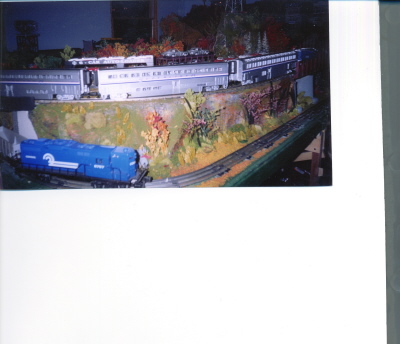 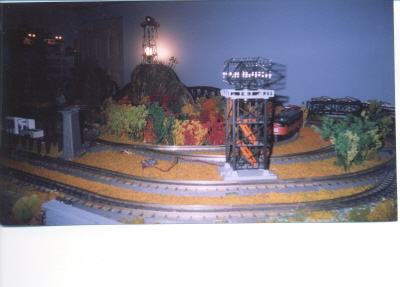 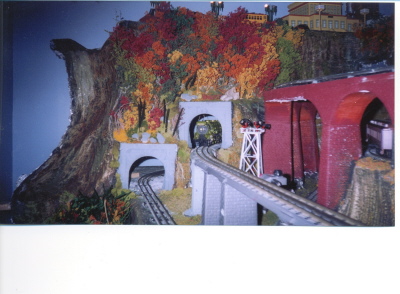 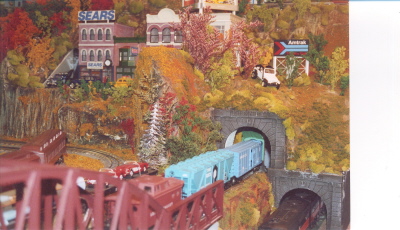 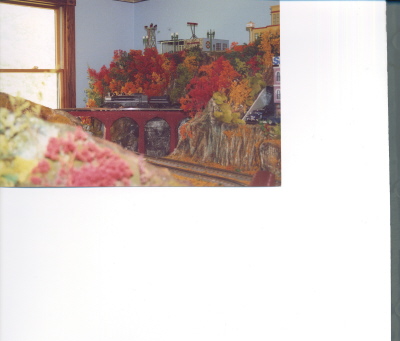 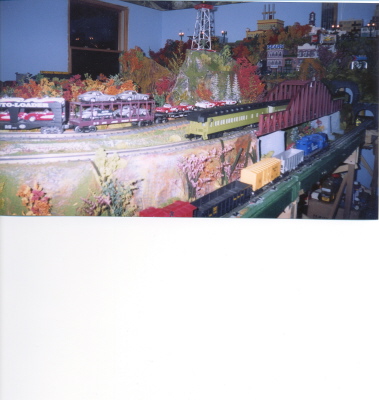 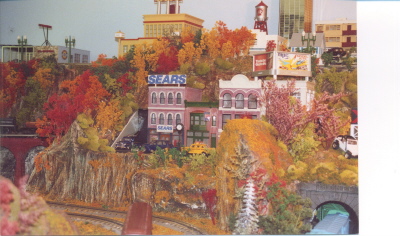