The following LOTS cars are available for purchase now and will ship 3-7 business days after your order is processed.

Click the picture of the car you want to purchase for more details and ordering instructions. 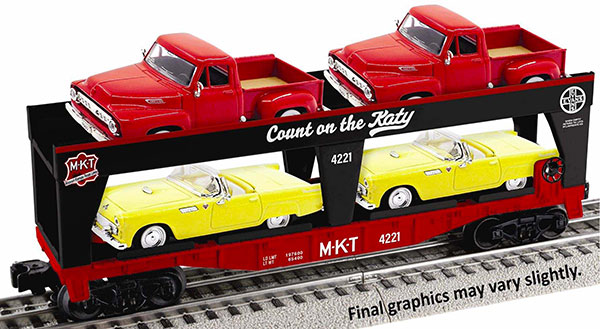 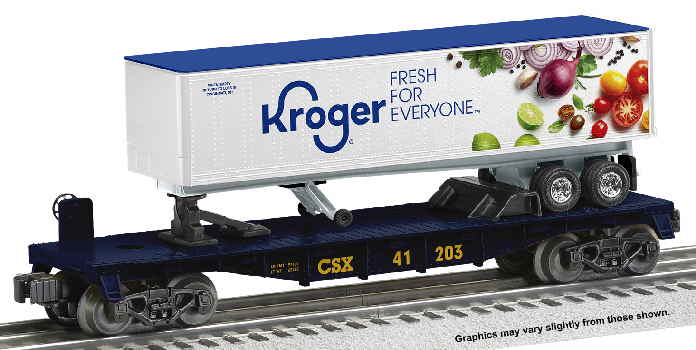 Periodically, LOTS has offered other special commemoratives in association with the Convention, to mark an anniversary, or to raise funds for the organization. With three notable exceptions, these have consisted of accessories, such as:

Each of these was specialized for LOTS by the addition of club-specific billboards or added lettering.

A special tractor-trailer was made in 1994 to go with the 5-car BN set. The tractor has LOTS markings and the CN trailer is otherwise the same as the one on the 15th anniversary car, except the number is one digit off.

The three important exceptions are:

A non-Lionel special car was also made as a fundraiser in conjunction with the 1998 San Diego Convention. This was a “San Diegan” 40-foot boxcar made by Weaver, with additional Convention resort markings added.

Stand by, though – some more specials may be forthcoming soon!

In conjunction with each of its National Conventions, LOTS offers its members an exclusive annual commemorative O gauge car, produced by Lionel expressly for LOTS, and decorated prototypically for a railroad or company which had served the convention city at some point. The convention notations on the cars are blended into the car’s graphics to make them as inconspicuous as possible. Realistic decoration is the goal for all the club’s Convention cars.

Through 1987, the young club was unable to generate sufficient sales for Lionel to produce LOTS’ Convention cars entirely. Instead, regular production trains were purchased and either over-stamped or professionally stripped and re-painted by an outside company. Overstamping for our first car in 1980 was performed by the Good Decal Company in Englewood, Colorado. The Pleasant Valley Process Co. in Cogan Station, Pennsylvania overstamped or re-decorated the LOTS Convention Cars from 1981 through 1987. Since1988, our cars have been produced and decorated to our specifications by Lionel directly.

Until 1989, the Convention Cars were produced based on early pre-orders and an estimate of subsequent demand that would both meet members’ needs and not leave LOTS with unsold inventory. This worked well enough in the early days when the club was small, but became more problematic as it grew. And in 1988, the demand for the Milwaukee Road log car, the first one produced completely by Lionel, was underestimated significantly. Thereafter, an agreement was reached with Lionel to produce LOTS’ cars via an open order period with a fixed cut-off date, after which LOTS would advise Lionel how many to make.

Today’s cars are sold exclusively to LOTS members – all orders are filled during the open order period and no orders are accepted thereafter. In most years, though not all, the maximum number of cars available to an individual member is limited. This is done to maintain the interest and the value of the piece. Accordingly, all the LOTS Convention Cars are prized by collectors and operators alike. Many of the cars can be found today at meets around the country – except those from the early 1980s, when quantities were very limited. However, in no case will a buyer be able to find a better price than when they are initially offered by LOTS – so it pays to join and order your car directly through the club!

Most of the 1980’s-vintage LOTS cars, and some of the 1990s models, bear a special notation reading “LOT XX-XXXX”. The first number showed the car’s    position in the Convention Car sequence (3rd, 7th, 12th, etc), while the second number indicates how many were produced – approximately. For example “LOT 2-300” was the second car produced (in 1981), and 300 were made. The first car (the 1980 Cotton Belt) simply read “LOT 360”, without the sequence number. Interestingly, the 1988 log car – the first one made by Lionel, omitted the production note entirely. It should have been marked “LOT 9-500”. As the club expanded, the number of cars made exceeded 1,000. In recent years, Lionel has sometimes been forced to “freeze” the decoration of the car before the total number ordered becomes known, so a few cars will be labeled “LOTS XX-YYYY” with the year of production substituting for the quantity made. The years 1993-1994 marked a summit year for the club’s Convention Cars. Thanks to the diligent research and efforts of then-Vice-President Steve Horvath, Lionel produced a unique five-unit green Burlington Northern TTUX articulated flat car with vans. This car is recognized as one of the finest cars and sets offered to date by any train club – as shown by the fact that it still stands as the most popular pieces made by LOTS. 1,900 were made of the 1994 two-piece car.

Newbraugh Brothers Toys (NBT) was a company founded in 1974 to redecorate toy train related items for smaller businesses and clubs. Seymour Knight of PVP did all the decorating for NBT during the time that the first LOTS cars were being made in the early 1980s. The cars from these years (except the 1986 Seattle meet car), have special notations either silk-screened on the side or on the underside of the car. “BLT PVP X-XX” will designate the month and year of production. Another notation of the form “NBT XXX-XXXX” is intended to describe the type of item, the source, and the sequencing of the car within the PVP/NBT operation. The first digit shows the type of car (e.g. 3 = gondolas & hoppers; 5=boxcars; 6=reefers, etc). The next two numbers are a code for who produced the original piece and how it was changed: (e.g. 05= O-gauge item made by Lionel fully redecorated by PVP; 06= O-gauge item made by Lionel with additional markings by PVP). The last four numbers designate the sequence in which the cars were made by NBT. The first car was numbered “1001”. The LOTS 1981 reefer was the 160th car redecorated by PVP/NBT and so bears the number “1160”. The markings on the rare Michigan Central boxcar from 1992 read “505-1204”. These markings appear on the 1981 thru 1987 editions of LOTS’ Convention set.

A true variation exists for the 1981 E. Kahn’s & Sons reefer – 124 were issued with a red roof and ends, while 176 were made with brown roof and ends.  Although additional markings were added by PVP to the 1986 black C&O gondola, the cars sold to LOTS by Lionel were unusual in their own right.

The original car (#6211) was made by Lionel in 1984 and ’85 as part of its catalogued 1402 Chessie System set. Dick Johnson, HCM-256 convinced Lionel to rerun the cars for LOTS. But the rerun versions were a variation! They included lines above and below the “C&O 6211” text (the originals lacked the lines), and the lettering was a brighter yellow than the original. To top it off the load supplied by Lionel was not two yellow radioactive waste containers as the original set had, but two dark blue round canisters with a coal load. There are also 12 of the cars (with lines) which were not needed to meet the orders and do not have the added PVP over-stamping. These are in members’ hands, too.

Only two pre-production prototypes exist for the cars prior to 1988 that differ from the production runs. In 1984 the first car made by PVP (for LOTS’ approval) contained a rectangle with lettering “Return when empty to PRR, Pittsburgh, PA” which was about twice as large as on the prototype boxcar. Regular production has the correct size. The prototype was auctioned to a member at the 1984 convention. Two identical prototypes were made for the 1985 Stauffer tank car. They are a lighter gray than the production pieces, and the spacing between “SCHX 303” and the capacity date is wider than on the regular run. One of the cars was auctioned at the ’85 Convention, and the other was given to the Equipment and Services Manager at Stauffer Chemical Co., for his help in making the car absolutely realistic. Some veteran LOTS car collectors consider this tank car one of the handsomest in the Convention Car set.

The 1986 Seattle Meet Car has a prototype which is tuscan-brown with yellow doors and lettering. It was later discovered that the full-scale tuscan cars on the SNC had white lettering and a different text arrangement. The design was dropped. The regular run (only 47!) was made green with a green “V” stripe atop yellow doors. The tuscan prototype is in the collection of a LOTS member.

So far, only three factory errors are known to exist on the LOTS cars. A 1991 CSX Autocarrier has inverted printing at one end of both car sides, adjoining the ladders, a 1997 PPL Standard O hopper is missing the car number and load capacity data at the left end, as well as the built date and Bethlehem Steel logo at the right end and a 2006 Virginian Car with the lettering of Virginia no “n” on one side.