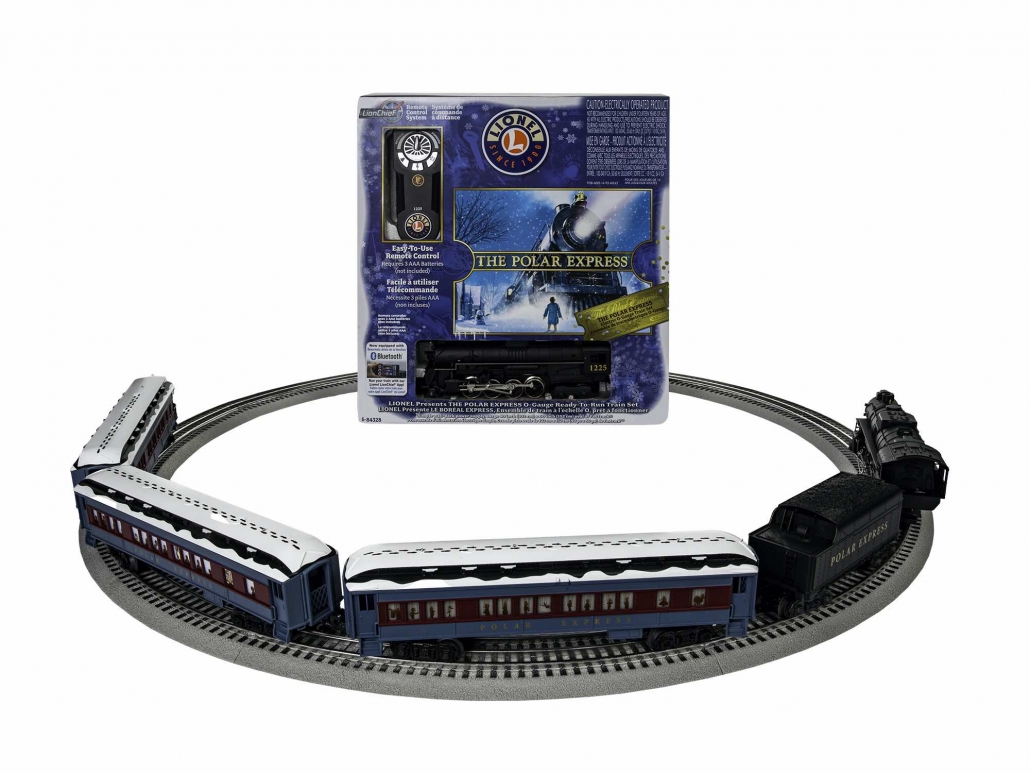 Tracking Down The Elusive Polar Express
(Seen it?, Enjoyed it?, Get the Lionel train set!)

Inspired by reading the book, The Polar Express, countless times to my two sons, George and Geoff, in their toddler years; we were all quite elated to the announcement that Warner Brothers was finally bringing the book to the BIG SCREEN in 2004 starring Tom Hanks. Penned by Chris Van Allsburg in 1985, this book quickly became one of their childhood favorites. Indeed, the movie was a must-see!

This was going to be BIG; had to pre-order it and I did – early on! I quickly contacted my Lionel train supplier in New Jersey, “Choo Choo Eddie,” to place my order. I didn’t mention anything of it either to the boys or to my wife, Joanne. The wait was on!

Months seemed to crawl by in anticipation of the movie and the train set. Lionel devoted two more catalog pages to “The Polar Express” train set in it’s 2004, Volume 2 Catalog and

media ads for the movie version started appearing on television and at the movies in late Spring. The 25th Anniversary LOTS Convention in Cincinatti passed as did Spring and Fall York TCA meets without even a glimpse of a prototype at the Lionel display. I was beginning to wonder if “The Lawsuit” was going to bring this production to a screeching halt! Online allusions to “The End” were pessimistic at best and heads were rolling. November was quickly approaching! I was beginning to lose faith.

With the film set to premiere before Thanksgiving, my doubts increased as the day grew closer. Online chat groups and postings touted a glut in their availability. I began to muse about the ol’ “chicken and egg” story. Mid-November, “Choo Choo Eddie” finally called with the good news, “They’re here!” Just like that it was finally here! I quickly planned for a clandestine two hour trip to take possession of this long-awaited set. Feeling like a spy during “The Cold War,” I snuck in, paid the man and snuck the set out. It was BIG – and HEAVY! I knew then that I had a winner. I snuck the set inside in the dead of the night. After examining the box, I carefully placed it into “The Archives” to sit unopened.

The premiere was now just days away. I wondered if Geoff, almost 15 and a rugged, football playing high school freshman, would be interested in seeing The Polar Express movie with me. I schemed to fire up his interest so that I, a grown-up, a man who plays with trains no less, would not have to go it alone! Each time the ad appeared on TV, I counted the days aloud to show my interest. Should we wait for the DVD version? “No way!,” he exclaimed wanting to join me.

Young George for whom the book was originally gifted for his third Christmas missed out on the movie so far. Almost 22, in college and living away from home, works in a model railroad store. Since this is the hobby’s peak season, I see another opportunity to see it when he come home on Christmas break.

Child or adult, The Polar Express is indeed a must-see, entertaining animation for any train afficiando and the screenplay matches the book. Tom Hanks portrays several key characters and I can’t wait for the DVD extras for “The Making of…” Enough said! What about the train you ask?

Highly detailed and reasonably priced, “The Polar Express” train set is one of Lionel Trains finest offerings. After viewing the movie and reviewing the train set, one quickly makes the connection between both. The “1225” 2-8-4 Berkshire and tender is a believable reproduction of its role model (see December 2004 Switcher). The coach and rounded observation cars window silhouettes depict scenes from the movie. The set also contains four movie characters and a brass bell, a 40″ x 60″ FasTrack oval and transformer. This train set is superbly done and ready-to-run!

Black Friday brought several e-mails from dealers offering Lionel’s “The Polar Express” train set close to double the list price and more. My advice…Lionel says more are on the way to dealers identical to the first shipment. Believe it! I already have my order in for a second – one to run and one to keep!

Epilogue – Our family went to New York City on November 29th to see the Radio City Music Hall Christmas Spectacular. Arriving early, we had plenty of time to stroll down 5th Avenue and over to Macy*s Herald Square store where I spotted the Lionel “Polar Express” in a window adjacent to the Broadway entrance. I quickly led the family toward the window where their eyes widened upon seeing “The Polar Express” in all of its glory. I could not contain my secret any longer. I told them, “We have one to run under the tree this Christmas.” I believe that I’ll be seeing The Polar Express again real soon!