SWARM, which stands for “South West Alabama Railroad Modelers,” is a Mobile area organization for model railroaders in all scales. A group within SWARM, sometimes referred to as “Southwest Alabama Lionel Railroaders,” has built and operates a modular O-gauge layout that’s typically 14 by 36 feet and features a double-tracked main line with wide-radius curves, passing sidings, a make-up yard and two operating trolleys. Photo No. 1 shows the modular Lionel layout as set up and operated at Colonial BelAir Mall in Mobile the weekend of June 8 – 10, 2001. 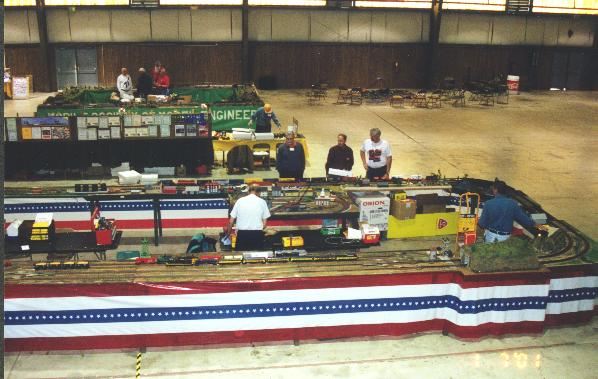 Photo No. 2 is an “aerial view” of the layout taken at the January 2001 Great American Train Show (GATS).

An advantage of a modular layout is that it can be stored when not in use, and we store the SWARM layout in an unused party room at one of Mobile’s many large houses along Government Street, near downtown. An another advantage is that size of the layout can be adjusted, within limits, to fit the available area. 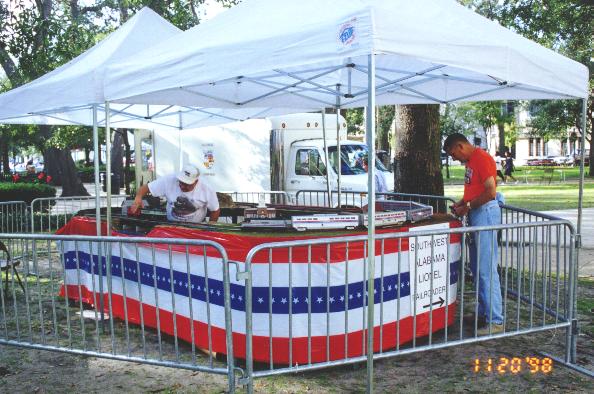 This photo was taken at Mobile’s downtown Bienville Square where we reduce the size of the layout to fit under the tents supplied by the city, just in case it rains during the annual lighting of the Christmas tree ceremony. (We’re not apt to have snow!) This flexibility is very important since we try to take advantage of most opportunities to show off model railroading.

Photo No. 4 was taken in front of Mobile’s historic Gulf, Mobile & Ohio depot during ceremonies where Congressman Sonny Callahan announced that federal funds had been designated to help restore the depot and convert it into a downtown transportation hub. Note that our layout is in the center of the action, directly in front of the speakers’ platform. That day we operated an all-GM&O freight and an AMTRAK Superliner train similar to the Sunset Limited that comes through Mobile and one day, we hope, will stop at the restored GM&O rather than at the present CSX station. 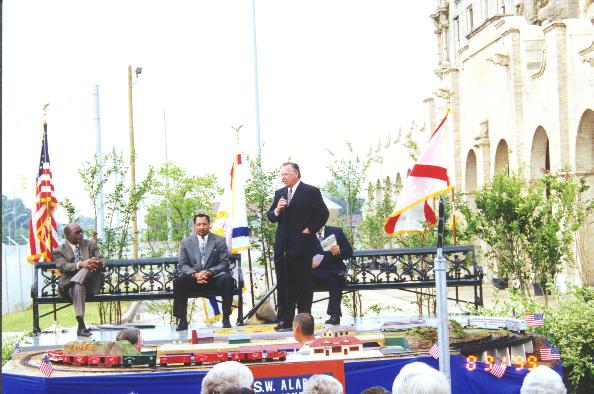 The layout has evolved over the years, starting with corners that Herb Kern(LOTS Vice President and head “honcho” of SWARM) made to the same standards used by a club he had belonged to in Plano, Texas.

One of the corner modules is in the foreground of Photo No. 5 taken at Mobile’s Colonial BelAir Mall in June 2000. In the background, Herb is talking with SWARM member Herman Ozga. 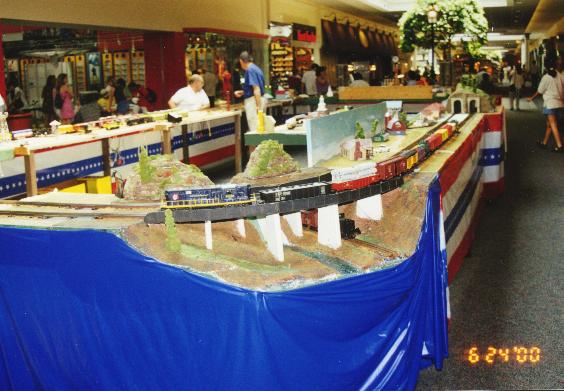 Photo No. 6 shows SWARM members Howard Hickey (also a member of LOTS), Jim Wagner and Herman Ozga installing legs in preparation to set the layout up at one of the train shows sponsored 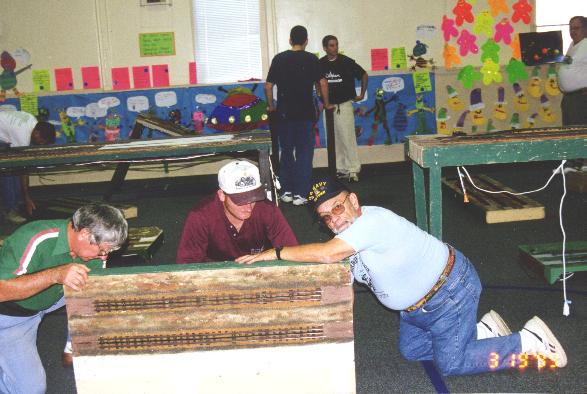 by SWARM during March each year during the Fairhope Arts & Crafts Festival. Photo No. 7 shows installation of 2 x 2 legs and

Photo No. 8 shows the 4 x 4 plastic gutter down spouts that we have used for ease of installation on our newer modules. Note that each module is wired using color-coded extension cords to provide direct connection with the transformer outputs, not relying on rail connections between modules. Also, some of the newer modules have been made from interior doors which are much lighter than the plywood and 1×3 construction used for the older modules; however, depending upon usage, it is sometimes necessary to provide bracing to prevent sagging. 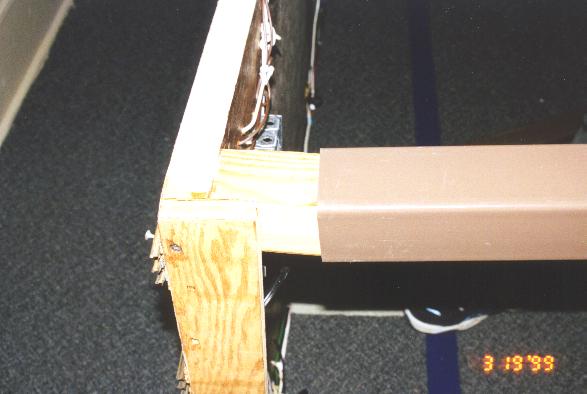 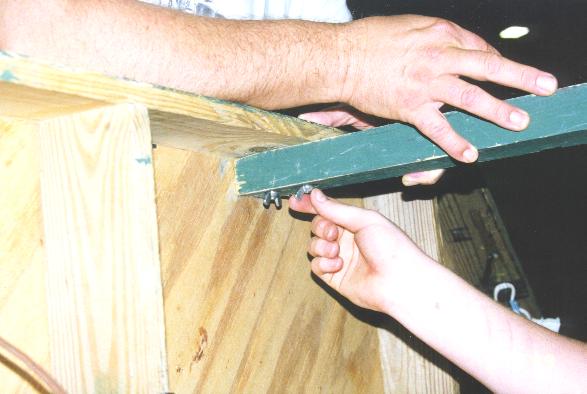 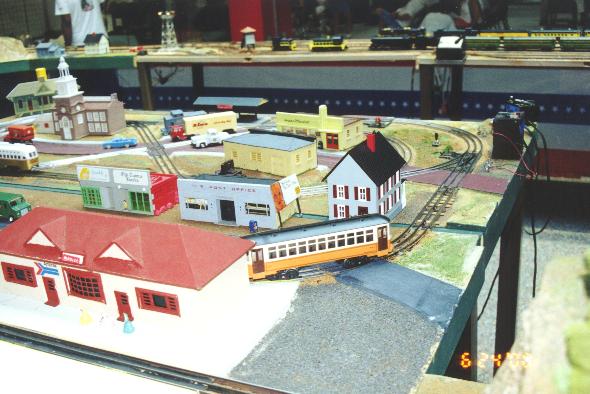 SWARM doesn’t own any trains — just the layout and accessories. Instead, when we operate each member brings his own locomotives and rolling stock. Photo No. 10 shows a custom-painted Cotton Belt GP-7 (Lionel) pulling a string of LOTS/LCCA 2000 convention cars, Canadian Pacific double-stacks. 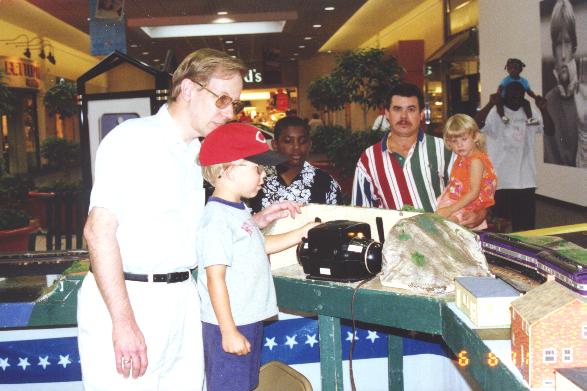 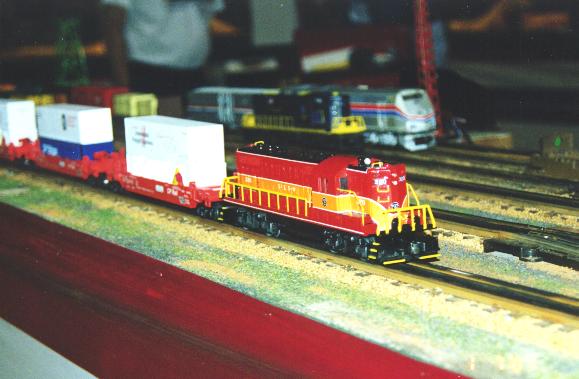 Photo No. 12 shows Robert Krebs give a thumbs up as his Lionel Maersk train rounds the bend and heads for a tunnel. 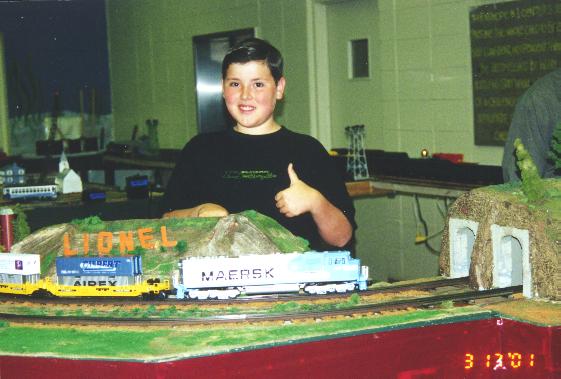 Photo No. 13 shows an L&N passenger train passing a postwar Lionel 685, and 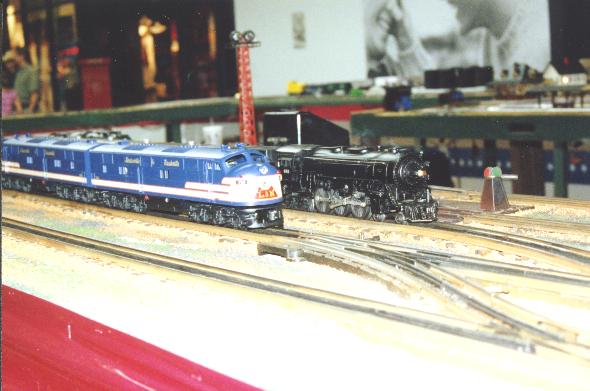 Photo No. 14 shows a MTH W&A “General” in operation while an interurban exits the tunnel and pulls alongside, with a postwar Union Pacific 2023 in the foreground. 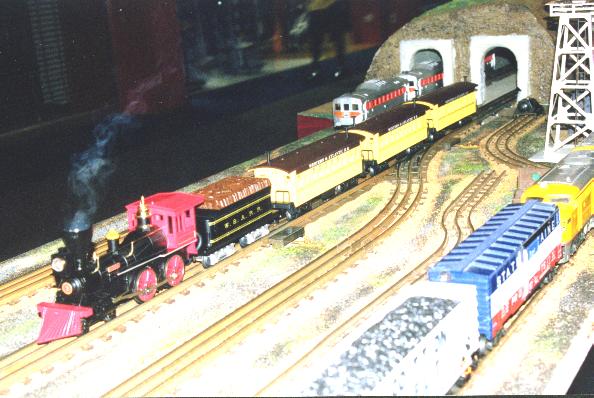 We the members of SWARM are firm believers in the saying that “model railroading is fun!” and we enjoy sharing our hobby with others of all ages.

Photo No. 15 shows our banner in front of the Kindergarten – 1st Grade Center in downtown Fairhope, AL across the bay from Mobile. 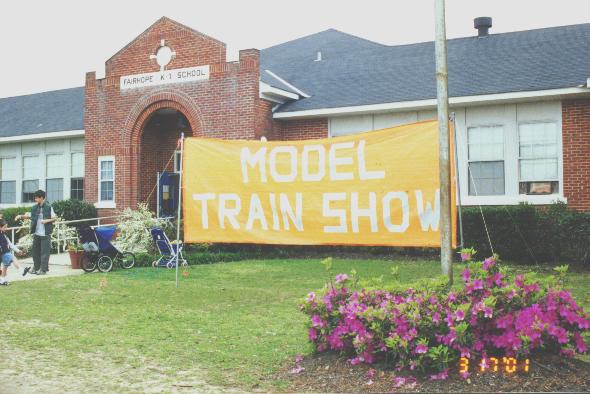